So, my last post of the year 2011. An year that was kind of like a sour punk candy, green apple flavor. :-) Sweet, little tangy, chewy and rubbery. Flavor-wise I liked but texture-wise, may be it lasted a bit longer. Should have ended sometime earlier than usual. All said and done, it tasted nice and left a decent after-taste in my mouth!!

2011 gave me lots but like the balance that life creates, there were some not-so-great moments too. The ones that stand out would be:

·        I finally started writing through this blog!! My biggest high of the year without doubt. The feeling that this space is mine gives me so much liberty to be myself and write what I want. I love being in these web walls. Feels safe and secure here!

·        Not many but some religious readers that I have got through this space. People who have been reading it since beginning and have shared their feedback with me. Extremely grateful to all those who take time out and read my posts.

·        After thinking and cribbing about it for so long, this year I managed to learn Salsa. Learning the dance form was liberating and relaxing.

·        Got back to my best friend of over 15 years!! We fell apart 2 years ago and this October when I first called her up, we talked like we had never parted. That’s the beauty of a friendship like this. It gives you the comfort cushion and you feel right back at home!! I love her and now yes, I am a maasi too as she became a mommy 2 weeks back! :-)

·        Trip to Taj Mahal..again!! It is always one of those places that I look forward to visiting!

·        Completed an year in advertising! Fun, madness, excitement, frustration…all of it rolled into one…some hell of a ride it has been!

·        Made some awesome friends. And yes, as I write this, there is some pain of losing out on two friends who decided to move on.

This collage is a collection of my best moments of 2011 and some emotions are best captured through the lens. May the smiles, the hopes, the soul and the life in these pictures live on and grow some-folds in 2012!! 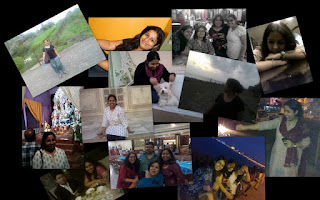 Email ThisBlogThis!Share to TwitterShare to FacebookShare to Pinterest
Labels: Memories

The idea of a New Year’s Eve

I don’t know what is it about the evening but it definitely is the most talked about in the last week of December. Everyone asks your New Year eve’s plans and you too ask whoever you know about where they are headed. There are parties happening all around the city and newspapers are splashed with the best offers and packages from the restaurants and hotels for the 31st.

So many of my friends and colleagues have packed their bags and have headed to places outside the city to ring in the new year. One is en route to snowy Shimla, couple of them already in exotic Jaisalmer and one in the big bad city, Mumbai. Those in Delhi are headed to some parties in farmhouses and swish nightclubs.

I wonder if given a chance, would I like to spend it any different than the way I presently ?? For me, usually the last few days of the year are spent in some introspection in retrospection (though I do it all the year around as it is!). I, more often than not, end up looking at the months gone by, how they went, what could have been better, some memories here and there. But my new year’s eve is more than decided all the time. It has been same all these years. Come back home by dinner time, dig into the yummy dinner made by mom followed by gajar ka halwa (making its presence felt over the years and now an important part of the evening’s menu!!), watch Victoria’s Secret fashion show late night and retire for the night. No complaints, whatsoever!

Personally, new year’s eve to me is expecting some niceties from the coming year, hoping it is better than the one going, hoping I achieve a few of the goals I have set for myself (if at all I manage to set some), feeling a little low for things that went bad in the year, about people who left and some such things.

All that partying, celebrations, dining and wining are the ways to bring in the new. Even though symbolic it may sound, but in the end, we do need a break from the hectic, brain-wrecking 365 days that are just about to end and a wish to have a fresh start to a brand new year. May be it’s just another reason to party, but when did it harm anyone?? Definitely, to each his own.

So, I am sure all of you have good plans for tomorrow evening. Whatever you are doing, wherever you are headed, wherever you have set your bon-fire – home or hills, just live it up. And take a minute out for those who are not so privileged. If it is your old woolen or a blanket or the excess food that you ordered in or barbecued, take a step further and help the needy on such a day. You will feel satisfied, happy and blessed. :-)

Read this quote somewhere. Loved it. So apt!!

‘For eleven months and maybe about twenty days each year, we concentrate upon the shortcomings of others, but for a few days at the turn of New Year we look at our own. It is a good habit.’
Posted by Naina Madan at 1:33 AM 1 comment:

All those who know me well, know that I am very scared of dogs. Dogs of all shapes and breeds. Whenever I visit friends’s or relatives place where there is a pet, I, sometimes politely and sometimes not-so-politely, ask them to keep the dog in another room. Atleast from where I don’t get to see him.

My friends who have pets or are animal lovers used to tell me that my fear was unreasonable as dogs are harmless and very lovable. I am sorry, I understand all that but I just could not bring myself to facing this fear. Not until last week.

I happened to visit a very good friend, Mann (which is her surname & not name, and that’s how she is known as) at her place in Bhiwadi. She is an animal lover, has always had dogs as pets for company at her home since childhood and would not shy away in chucking a ‘conventional’ lifestyle to work for an animal welfare organization. She had told me about a certain ‘Mizo’ at her home and I had heard many stories about how he came to the Mann household. I was told that Mizo is unlike the ‘dogs’ type. He is cute, gentle, quiet, a peace-loving lad, most of the teeth are broken (just in case, you know!) and does not bark at anyone. Impressive but I would definitely let it pass. Honestly, I wanted a good time with my friend, chit-chat with her all night, do some bitching and the usual jazz. And just that! Ofcourse, I had asked her to keep the furry chap in another room.

But clearly destiny had other plans! Needless to add, I was shit scared when I entered the house and found him at the door. He did not bark!!! I was obviously more petrified than he was!! I tried to keep myself distracted with arranging my bag or talking to Mann but my eyes were following him. And there he was, sitting quietly, looking at me with those beautiful and kind eyes. I am telling you, it were those eyes that took my heart away. My fear was vanishing and vanishing quick. In just 15 minutes of being introduced to him, I was sitting on the sofa, trying to strike a conversation with Mizo and wanting his attention! He did not disappoint me either. And soon, I dog-walked Mizo, made him wear his coat, fed him biscuits, made him sit on my lap! I even texted my sister saying ‘I love the doggie’, when she asked me how was it going there.

I had warmed up to his presence but still there was a little tiny-winy hesitation. He shocked me when he entered the room at midnight when we girls were chit-chatting. He not only climbed the bed but also made himself cozy and pretended dozing off there! All I was worried about was what if he rolls onto my side in the dark! Mann then had to put him down at the rug.

My fear for dogs as such may not have gone completely but Mizo made me fall in love with him. I kept looking for and asking for him, when he would go away in other room. I would call out his name and he would listen. He was so much like a kid who was throwing tantrums seeing a guest at home!

This picture is a memory of the new friendship that I built, with Mizo. A week ago, I would never have pictured myself like that, not even in my wildest dreams. It is such an achievement for me. And Mizo…I love you!!  :-* 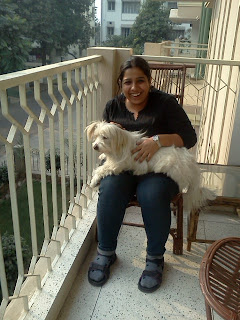